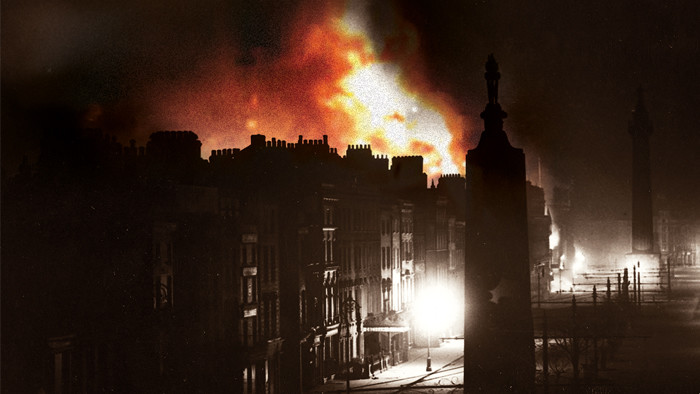 ‘1916 The Irish Rebellion’ is a landmark documentary narrated by acclaimed actor and Irishman Liam Neeson.  It examines the 1916 Easter Rising in Dublin and the subsequent events that led to the establishment of an independent Irish State and indirectly to the breakup of the British Empire.  This seminal event in Irish history and its ramifications were felt as far as India and other parts of what was then the British Empire. To commemorate the centenary of the Rising, it is timely to take a fresh look both at the events themselves and their significance in world history.

An initiative of the Keough-Naughton Institute for Irish Studies at the University of Notre Dame, the film was produced by COCO Television and aims to place the Irish Rising in its European and global contexts as anti-colonialism found its voice in the wake of the First World War.  ‘1916 The Irish Rebellion’ will broaden the public understanding of the historical interconnections between Britain, Ireland and the United States, connections that continued to have significance up to and including the recent Irish peace process.

The film has received huge interest internationally and will be screened at prestigious film festivals around the world, from Moscow to Belgrade, Sydney to Buenos Aires.

A three-part documentary series was also produced alongside the film and was screened by RTE One in February. It will also appear on 120 US television stations, as well as networks across the UK, Asia, Europe, Latin America and Australia.

Stuart Switzer, Managing Director at COCO Television commented: “It’s exciting to see that this pivotal documentary about Ireland’s history has gained such worldwide attention, even before its premiere in Ireland.”

In the centenary year, as a result of the documentary, the Keough-Naughton Institute for Irish Studies is partnering with the Irish Government and leading universities worldwide to host a series of international academic events. Called Reframing 1916, these events will bring select Notre Dame faculty to museums, institutions, and universities with an Irish Studies presence to engage with their faculty students and the public, in a scholarly response and reassessment of the events of 1916. The reframing event will take place all over the world – in Europe, Australia, New Zealand, Argentina, Brazil and North America.