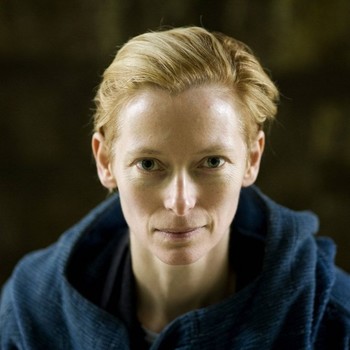 Katherine Matilda Swinton (born 5 November 1960) is known for her roles in both independent arthouse films and blockbusters. She won the Academy Award for Best Supporting Actress for her performance in the 2007 film Michael Clayton. She also won the BAFTA Scotland Award for Best Actress for the 2003 film Young Adam, and has received three Golden Globe Award nominations.

Swinton began her career in experimental films, directed by Derek Jarman, starting with Caravaggio (1986), followed by The Last of England (1988), War Requiem (1989), and The Garden (1990). Swinton won the Volpi Cup for Best Actress at the Venice Film Festival for her portrayal of Isabella of France in Edward II (1991). She next starred in Sally Potter's Orlando (1992), and was nominated for the European Film Award for Best Actress.

Swinton was given the Richard Harris Award by the British Independent Film Awards in recognition of her contributions to the British film industry. In 2013, she was given a special tribute by the Museum of Modern Art.
Share