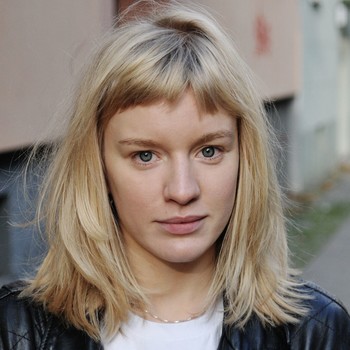 Lena was born in Leninogorsk, Kazakhstan, in a family of teachers.
She speak Russian, English, Chinese and basic German.
Because of ecological problems and certain health issues the family had to leave the place and go to the North of Kazakhstan. In 90s Lena's family just couldn’t survive with teacher’s salary, they were extremely tight with money and the parents had to change something. They started selling stuff...
She left her hometown when she was 17. Went to China, Urumqi.  Studied Chinese, then International economy and trade. Then she finally admited that she is an artist and quit studies. She went to Almaty  and started doing theater, impro theater.

After 2 years she got her first role on TV - extremely long Santa Barbara style TV series, but she was practicing a lot. She felt like it is the only thing she feel like doing - movies. Play, live, enjoy, discover.
Than Lena went to Berlin, found an agent and started playing in German speaking films without speaking German in real life. First movie - “Peripherie” was made by students of Zurich University of the Arts. Then - “Tatort: Kriegssplitter” - main role in episode with Joel Basman as a co-star.
After that Lena went to Ludwigsburg for International Screen Acting Workshop and it was so intense and amazing.
She met the director of her next film - "Because we dreamt of flying", Lily Erlinger.
Then Lena played in Kids Run by Barbara Ott with absolutely amazing Jannis Niewöhner. They presented their film at Berlinale this year.
Also, in 2020 Lena and the director Vladlena Sandu showed the pilot of the series “Identification” in the market section.
At the moment Lena lives in Moscow working on another series.
*Photo by Stefan Klüter
Share