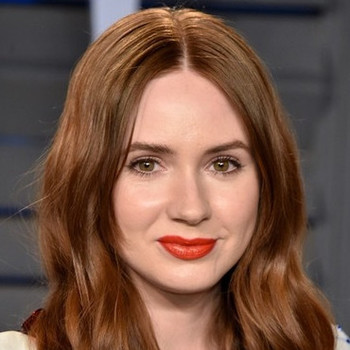 Scottish actress and filmmaker Karen Gillan first drew the attention of audiences in 2008 in Channel 4’s sketch series “The Kevin Bishop Show”. In the show she parodied a broad variety of celebrity characters including Katy Perry and Angelina Jolie. In 2009, Gillan became a household name as the Doctor’s new companion in the fifth season of the revived series “Doctor Who” opposite Matt Smith.

After two years on British television, Gillan landed the lead role in ABC’s original comedy “Selfie” (2014).  At the same time, Marvel fans worldwide were introduced to Gillan as the character of “Nebula” in in “Guardians of the Galaxy” (2014) opposite Chris Pratt and Zoe Saldana. Gillan returned to the franchise in the second installment of “Guardians of the Galaxy 2” and in “Avengers: Infinity War.” In December 2017, Gillan portrayed the female lead in Sony pictures reboot of the 1995 Robin Williams film, “Jumanji: Welcome to the Jungle” which amassed over $943 million box office to mark the studio’s second biggest release in history.  Gillan will reprise her role in the sequel “Jumanji: Jungle Cruise” set for release on July 24, 2020.

Gillan’s other credits include a role in HBO's mockumentary “7 Days in Hell” (2015), and theatre work on a West End stage in the production of John Osborne's play “Inadmissible Evidence” at the Donmar Warehouse in London and in the Broadway play “Time to Act”.

In 2015, Gillan debuted as a screenwriter and as a director of two short films: “Coward” and “Conventional”.