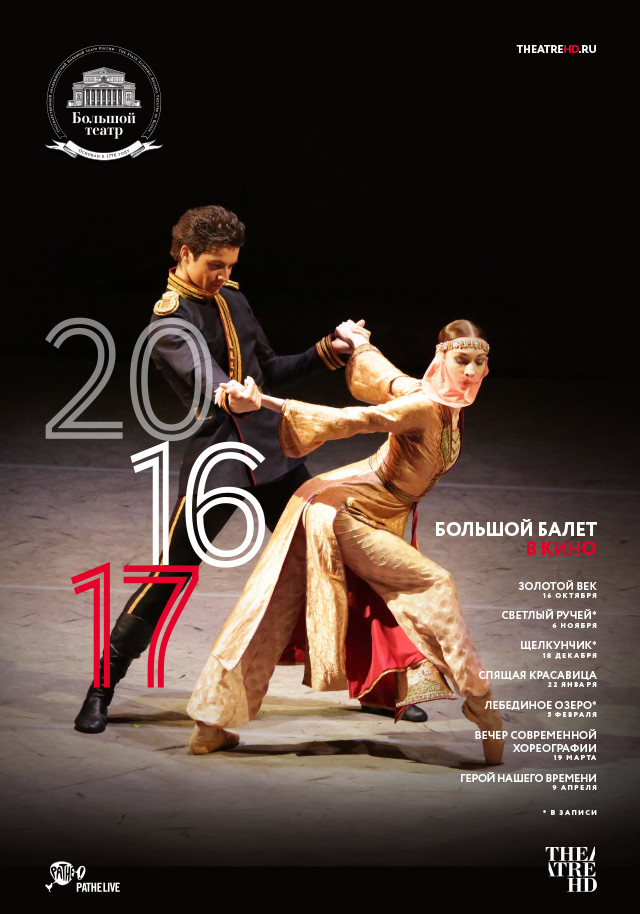 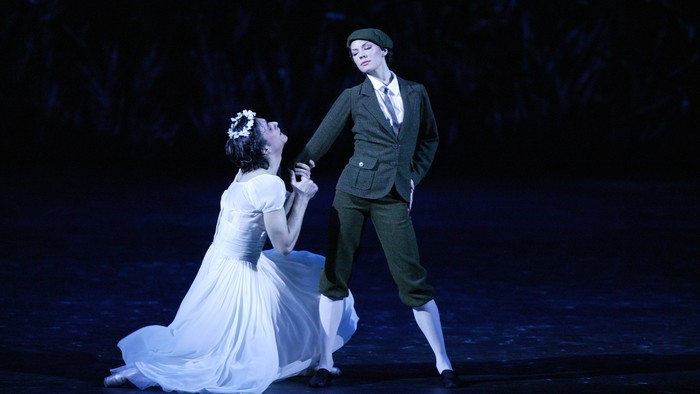 Act I
Scene 1
A small wayside halt, in the steppes, on one of the branch lines of the North Caucasian Railway. Early autumn. The local collective farms have completed both theirharvesting and autumn sowing.

A brigade of artistes from one of the capital’s theatres is due to arrive in the region to take part in the harvest festival, marking the end of the field work. Some members of the nearest collectivefarm, The Bright Stream, have come to the halt to welcome their guests. They include the collective farm activist, Gavrilych, who, though advanced in years, is full of the joys of life and a generalfavorite; the school-girl Galya, and some of her friends, with a bunch of flowers for the artistes; Pyotr, an agricultural student and his wife Zina, a local amusements’ organizer. The last to arriveare two dacha dwellers: an elderly man and his anxious-to-be-younger-than-she-is wife. Both of the latter, bored to tears, have come to gawk at the visiting artistes. While waiting for the guests toarrive, the dreamy and thoughtful Zina buries her head in a book. Her husband, Pyotr, who is of a cheerful, buoyant disposition, tries to distract her, inducing the others to share in his efforts.Eventually all, except Zina, proceed to the platform. The excited crowd returns, together with the artistes — a ballet dancer, her partner and an accordion-player.

The amusements’ organizer, Zina, hails the ballet dancer who stops in her tracks. They recognize each other as old friends, for they once studied togeth­er at ballet school. Since then Zina hasmarried Pyotr, the agricultural student, and has gone to work with him on the collective farm where no one has any idea that she used to be a dancer. The two friends, who have remained alone, gaze ateach other with curiosity.

The ballerina asks if Zina has forgotten her dancing. But, living in the country, she has not forgotten her dancing skills and intends to prove it. The two friends, compete with each other, trying tosee who can remember the most of their former lessons. Gavrilych and Pyotr now appear: they have come to fetch Zina and the ballerina. Zina introduces her husband to the ballerina. Dazzled by theballerina, Pyotr begins to court her. The latter feels her first pang of jealousy.

The two brigades greet each other. An improvised celebration gets under­way. The artistes display the presents they have brought with them for distri­bution to the collective farm’s best shockworkers. There is a gramophone for Gavrilych, a silk dress for the best milkmaid. The prizewinners are lustily congratulated, and the jollity merges into a dance. The first to break into a dance arethe grey-haired, bearded ‘inspectors of quality’ and their Gavrilych.

The dacha dwellers turn up, late as usual. They are forced to trip a measure and, by way of a joke, they dance an ancient Chaconne. Then comes a number by some young girls, members of an amateurgroup organized by Zina. But it is the milkmaid who is the center of attention: they want to see her dance in her smart, new dress. The milkmaid dances with the tractor driver. The merrimentincreases. Gavrilych winds up his new gramophone and asks the guest artistes to dance.

Not wishing to disappoint the collective-farm workers, the artistes agree though they dislike the idea of dancing in their ordinary clothes. They improvise a dance among the wheat sheaves. Theirdance gets a mixed reception. The farm workers watch it with pleasure, but the dacha dwellers only have eyes for the artistes themselves (the husband is taken by the classical ballerina, while hiswife is attracted by the ballerina’s partner). Zina is jealous of her husband. Pyotr, the young agricultural student, is more and more enchanted by the ballerina who seems so brilliant and talentedby comparison to his modest, unassuming wife.

The accordionist is asked to join in the dancing with schoolgirl Galya. Now some young field workers from Kuban and the Caucasus burst into a gay, warlike dance which enthralls all present. Themerriment reaches its height. Eventually, the assembled company is invited to partake of refreshment. As all make their exit, the old dacha dweller manages to whisper in the visiting ballerina’s earthat he would like to see her again, his wife makes a similar proposal to the latter’s partner. Meanwhile, Pyotr goes off with the ballerina. Zina is totally distraught, she even starts to cry. Theyoung people, together with Gavrilych, try to calm her down. But now the ballerina returns and assures Zina that she has no intention of flirting with the latter’s husband. She suggests that Zinatell the young people that she too used to be a dancer.

Zina agrees and again the two friends dance together. There is general astonishment. The ballerina proposes that a joke be played on Pyotr and the others: she will dress up in her partner’s costumeand go and meet the anxious-to-be-younger-than-she-is dacha dweller’s wife. Her partner, made up as a female dancer, shall go to the rendezvous with the old dacha dweller. While Zina shall go to meether husband in the ballerina’s costume. The plan is approved.

Act II
Scene 3
A warm, southern night. A clearing, surrounded by bushes and trees. The young people have assembled. The dacha dwellers turn up too, late as usual. The accordionist has takena fancy to Galya, the schoolgirl, who had danced with him so merrily earlier in the day. He whispers to her that he will soon be back and that she should wait for him. Galya is quite taken aback. Theold dacha dweller, his wife and Pyotr remind their ‘sweethearts’ of their trysts. The young people are now determined to teach them a lesson. They quickly dress up: the ballerina in her partner’sclothes, the latter in female dress, Zina in one of her friend’s theatrical costumes. To add to the fun, the tractor driver puts on a dogskin. All is ready. Now Galya admits that the accordionist hasinvited her to a rendezvous too.

This revelation threatens to ruin their carefully laid plans, but the trac­tor driver comes to the rescue. He suggests to Galya that she should meet the accordionist as the latter had proposed, butthat he, the tractor driver, disguised as a dog, will not allow the accordionist to approach her. His plan is agreed. Galya, attended by Kolka-‘the dog’, waits for the accordionist. He appears and ismuch put out by the uncalled-for presence of the dog which seems very fierce and keeps on attacking him. Finally, the accordionist realizes he is being made a fool of but, taking it in good part, hejoins in the main plot.

The elderly dacha dweller turns up, wheeling a bicycle. He wants to make a good impression on the ballerina and has donned sporting gear. He is festooned with a gun, ammunition belt and telescope.The thought of the forthcoming meeting excites him. His wife turns up at the same spot. She is wearing ballet shoes to surprise the male dancer. It is time to put the plan in action. Suddenly, thedacha dweller catches sight of his beautiful ballerina , his Sylphide, in the middle of a clump of trees. It is in fact the ballerina’s partner, in female garb, but the old man does not notice this.His wife, who is observing him, objects to his flirting and chases off her husband. But she, in turn, is frightened by the tractor driver who, still in his dogskin, is riding the bicycle. Appearingin her partner’s costume, the ballerina mocks the dacha dweller’s wife. Finally, they both run off.

Enter Pyotr, the agricultural student. He is waiting for the dancer from the distant capital, but instead, he is met by his own wife, disguised as the dancer. He fails to recognize her. Joking andflirting with him, Zina disappears into the bushes. This lyrical scene gives way to slapstick. The old dacha dweller and male dancer disguised as the ballerina now come running in. ‘Romanticpassions’ reach an all-time high. The ballerina, dressed in male clothing, comes out from behind the bushes, and makes a scene. She demands satisfaction from the dacha dweller. There follows a comicduel. The first to fire is the disguised bal­lerina. She misses. Now the old dacha dweller is handed a pistol. Though he is frightened, he takes aim. Simultaneously, Gavrilych bangs a pail, and theold man thinks he has fired. Immediately the ballerina’s partner falls to the ground as though shot. The horrified dacha dweller takes to his heels. No sooner has he disappeared, than the ‘victim’comes to life and dances amid the laughter of the delighted plotters.

Scene 4
The beginning of the morning of the following day. The harvest festival. In the meadow, an improvised stage for the artistes. All the seats are taken.Pyotr, the agricultural student, is waiting on tenterhooks for the show to begin so that he can see the ballerina whom (he thinks) he met last night in the woods.

But to his great astonishment two dancers, dressed exactly alike, appear on stage, their faces hidden by masks. Their dance over, Pyotr, unable to restrain himself, rushes towards them. They raisetheir veils and the secret is out. Pyotr, who sees one of the ballerinas is his wife, timidly begs her forgiveness. Eventually they are reconciled. Pyotr has learnt his lesson: he now knows that hismodest Zina is both a first-class worker and a marvelous ballerina. The fes­tival ends with a general dance in which alt young and old take part, togeth­er with the guest artistes.