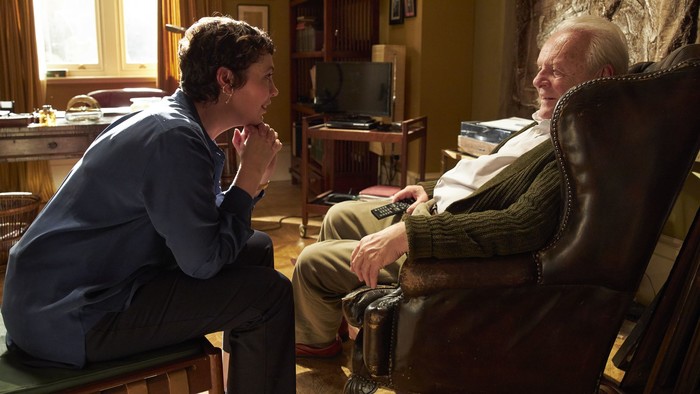 Anthony (Academy Award Winner, Anthony Hopkins) is almost 80 years old and mischievous. He lives alone in his London apartment and refuses each of the nurses that his daughter, Anne (Academy Award and Golden Globe Winner, Olivia Colman), tries to impose upon him. Yet such a necessity is becoming more and more pressing for her, as she can’t visit him every day anymore: she has taken the decision to move to Paris to live with a man she has just met…

But if this is the case, then who is this stranger who suddenly bursts into Anthony’s living room, claiming to be married to Anne for over ten years? And why is he claiming with such conviction that they are at the married couple’s home, and not his? Is Anthony losing his mind? Yet he recognizes the place: it is indeed his apartment, and only just the night before Anne was reminding him of her divorce… And didn’t she decide to go and live in Paris? Then why is she now insisting that this was never the case?

There seems to be something going around, as if the world, for a moment, has ceased to be logical. Unless his daughter, and her new companion, are the ones trying to make him appear as crazy? In fact, is their objective to rob him of his apartment? Do they want to get rid of him? And where is Lucy, his other daughter?

We have just entered the world of immersive cinema which puts us in the same world as Anthony and Anne.

It starts in a light-hearted manner – Anthony is having a bit of a tiff with Anne. Anne is exasperated because he has alienated his latest carer and he is grouchy because he believes his watch has been stolen. But, as the ridicule and laughs gradually dry up, astray in a labyrinth of answerless questions, Anthony desperately attempts to understand what is going on around him.

“The Father” is about the heartbreaking and uncompromisingly poignant trajectory of a man, once strong and ebullient, whose reality crumbles little by little before our eyes.

Yet it is also the story of Anne, his daughter, who faces an equally illuminating and painful dilemma: what must she do with her father? Should she take him with her to Paris, even if that means compromising her life with Paul? Does she have the right to live her own life? What happens when she must become parent to her own father? Can she provide dignity for her father, can she preserve her own dignity and grace? Can she fight for the enduring connection between daughter and father?