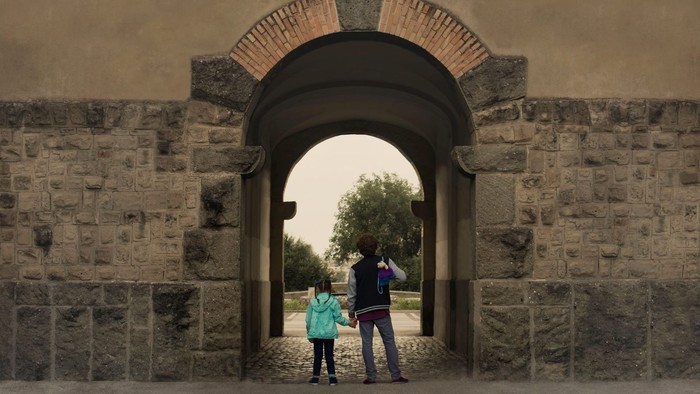 A package film that consists of the 7 best Italian shorts.

SUGARLOVE by Laura Luchetti. Cast: Pierfrancesco Favino, Anna Ferzetti, Claudia Potenza. Gemma and Marcello are about to get married. The ceremony is about to begin and they are both overwhelmed by their emotions, their fears and expectations. Like every couple they support each other and fantasize about their future, they swear eternal love to one another, but they are not just like any other couple who are about to get married. Gemma and Vittorio are two sugary statuettes on top of a wedding cake. Participant of the 75th Venice Film Festival.

NUVOLA by Giulio Mastromauro. Cast: Mimmo Cuticchio, Giulio Beranek, Marta Stallone. Is the story of Filippo, a retired teacher marked by pain over the loss of his wife.The man is determined to take his life, but someone knocks his door.

COSE DELL'ALTRO MONDO by Lorenzo Di Nola. Cast:Damiano Di Lella, Emanuela Fanelli, Emanuele Fiorenza. Three children ride fast their bikes along a dirt road in the park of a big city. Suddenly they stop just around a bend. A look of surprise and fear deforms their young faces. There is a small creature in agony at the foot of a huge tree in front of them. There is no other explanation: it is an alien…

ALLELUJA by Paolo Geremei. Cast: Osvaldo Brigante Anita Ferraro, Giovanni Capalbo. A touching story of children's faith, which can turn into a miracle even a simple misunderstanding.

IL LADRO DI SPEZIE by Elia Bei. Cast: Alesandro Lui, Hicham Bengueddime. Marrakech. An Italian tourist, obsessed by fear and prejudices against the Muslim world, will discover how simple it is to be surprised by what is unknown.

AGGRAPPATI A ME by Luca Arcidiacono. Cast: Ludovico Tersigni, Miriam Fauci, Beatrice De Luigi. A young man Filippo meets in a tram Alice, a girl with Down syndrome. She asks him to take her home because she’s lost her mother.

DOVE L'ACQUA CON ALTRA ACQUA SI CONFONDE by Massimo Loi, Gianluca Mangiasciutti. Cast: Nicolas Orzella, Federica Sabatini. Luca is a lonely boy. He likes to go at night to swim in a pool when there is no one and only silence remains to keep him company. Everything goes quiet until a Monday an unknown swimmer named Mia breaks into his own little world.