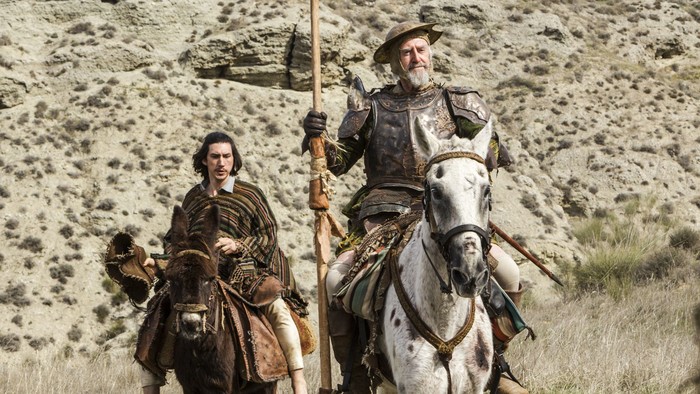 Once upon a time, Toby was an idealistic young film student. His great achievement, a lyrical re-working of the Don Quixote story, set in a quaint old Spanish village. But that was then; these days he is a jaded, arrogant and over-sexed commercials director. Money and glamour have derailed him, and now he juggles his boss’s wife Jacqui, a biblical storm and his own ego, as he tries to complete a new commercial shoot in Spain.

Until a mysterious Gypsy approaches him with an ancient copy of Toby’s student film: Toby is moved and sets off to find the little village where he made his primary opus all those years ago. To Toby’s horror, his little film has had a terrible effect on the sleepy village; Angelica, the young girl who was innocence personified, now works as a high-class call-girl, and the old man who played Quixote has gone completely mad, believing he really is the ‘Knight of the Mournful Countenance’.

A series of accidents leads to a fire that threatens to destroy the village. The police come for Toby, but he is ‘rescued’ by the deluded old man, who, mistaking him for his loyal squire Sancho, leads Toby away into the countryside, on the quest for his perfect lady, Dulcinea.

On their quest, Toby comes face-to-face with demons, both real and imagined, modern and medieval. Damsels are rescued, jousts are fought, giants are slain and women have beards! Reality and fantasy blur on this bizarre road trip which leads to a phantasmagorical finale.